How to Build a Serial Killer


The most perplexing feature of the original John Carpenter's 1978 shot of Halloween was its surrealist framework. The plot, clearly linked with the classical horror trend in the seventies' Hollywood, left out a crucial thing in movie art: causality. Viewers around the world passed by this problem because the film was aggressive enough to catch their attention with a murderer from hell: the super humanized killer of the white mask. The Jamie Lee Curtis screams (then a beauty, young and rookie actress), the thrilling soundtrack and a permanent state of darkness along the movie were dramatical enough to rocket the film to the status of an instant classic in the suspense and horror genre.
No matter what, after thirty years and a series of sequels, the problem of the absence of a causal link in the killer actions remained. Until the franchise fell in Rob Zombie's hands. His 2007 version of Halloween is a master piece of neo realism in American movies. But not just this; at the same time, his treatment of the plot erects a complicated mixture between the mentioned realism and old school supernatural horror. In his proposal, Mike Myers, the white mask murderer is, at the same time, a terrible serial killer and an indestructible demon. Reality and fantasy fades together into the innovative movie structure that works altogether with the power of narrative and the dreadness of the unexplainable.

So, the movie's first part builds the main factors of an insane mind. The young Mike (Daeg Faerg), an androgyn preteenager boy, lives in a decadent and vicious home environment, stuck in the turbulent waters of a deeply dysfunctional family, with his exotic dancer mother (Sheri Moon Zombie), a young woman with very low self-esteem, his alcoholic, cynic and bullying step father (William Forsythe) and his rude and annoying teen sister (Hanna Hall), he is in the verge of a major insanity breakdown. Pet killing, as usual in the serial killing mind, is the preface of a long-life killing spree. In this part of the film, Zombie draws with astonishing accuracy the dynamics of an ill mind: the interconnection between the social disintegration, clearly represented by the white trash family's interaction, and the subjective mental anomalies. In the middle of this, Myers discovers the power of the mask, the shield that uncovers, in his own words, "my ugliness". The first scene, powerful and disturbing, with the Kiss anthem "God of thunder" sounding high behind, shows the kid wearing an ugly clown Halloween mask while spoiling his little mouse just before ripping it apart with a scalpel. That's the same outfit he will use later on to perform his first bloody murder against an abusive schoolmate and, on that day's night, the beginning of his terrible family slaughter. In this nightmarish episode he finds his theatrical trademark: a realistic corpse latex Halloween mask which covers his entire head and originally belonged to his sister's boyfriend. Afterwards, we testify his unavoidable descent to the primitive stages of the human mind along his captivity in a mental institution; the behavioral spiral that turns him into the perfect killer. In his sanitarium reclusion he progressively loses all the human features of sociability; in the end, physically and mentally he is above the human world.


All the way through the movie, Rob Zombie performs his most skilled cinematographic feature: a neat and clean hyperrealism. Beyond classic realism and beyond typical gore, the way he works on the tiny junctures of reality puts him straight to the universe of art. In a paradoxical way, of course, because the filmic recreation of both the slums of society and the products of insanity in the form of human fluids and body lethal scars is always something reserved for special tastes and postmodernist critical dispositions. But that's just the point with the work of Zombie; he has recreated a series of contemporary cultural symbols, that constitutes an important part of the collective western imagination, in order to make an artistic net that is beyond pastiche. Zombie's hyperrealism (which first inception was in his remarkable 2003 filming debut House of 10,000 corpses, but only was completely achieved in its 2006 sequel The Devil's Reject) its a way of social critic because its a way to put in front of the viewer, in a disturbing and raw mode, the other side of the world; that is, the dark side of the bourgeois way of life is brought into question by the recreation of its debris, the perpetual machine of evilness in the world.
In his notable book about serial killers, following the FBI's behavioral sciences unit, Peter Vronsky establishes that "Serial killers murder for their own personal pleasure and carefully select their victims for their own reasons... Serial killing is an addiction, some experts say... Once a killing cycle is triggered, it is rarely broken". Zombie's Myers fulfills this description taking it to the next level.  That's the moment where the character subtly acquires his metaphysical status. Passing from a cold and violent serial murder to a killing machine (impersonal, efficient, straightforward) to a kind of supernatural incarnation of evil, he renders a brutal allegory of our times. In the era of God's death, the hypertechnologization of the world and the comfortabilization of life, the unchained evilness is our own transcendent universe, the kinky way to sublimate the anger and misery of our social system. 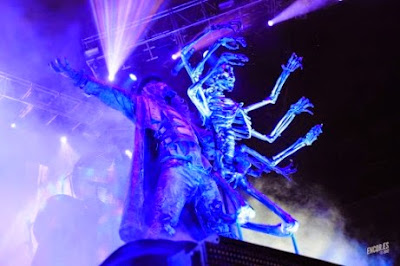